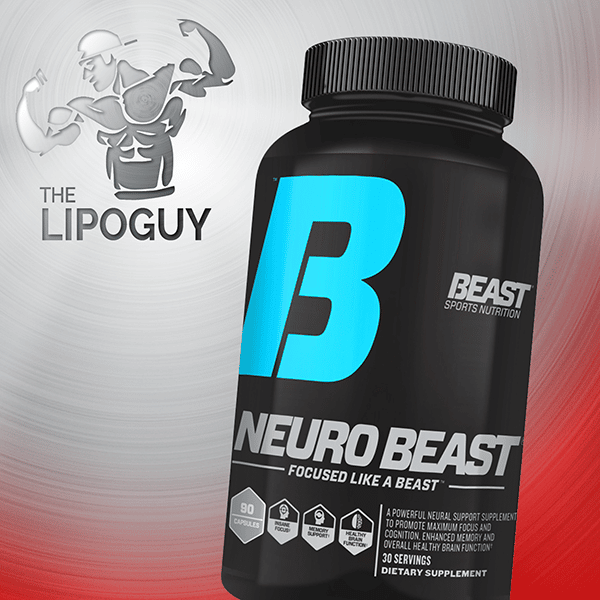 This formula was designed specifically to increase brain activity and cognitive function, as well as reduce stress through various mechanisms of action, all working together to make you perform at your best.

Neuro Beast is a comprehensive nootropic formula designed to increase cognitive function, focus, and memory.  It’s loaded with 10 superstar ingredients designed to work in synergy to help you be at your best, whether it’s at the gym, at school or in the office.  Neuro Beast was formulated by the Guerrilla Chemist who is known for masterminding some of the most innovative supplements in sports nutrition.

Natural Caffeine (from coffee bean): The most widely used supplement in America, and one of the most studied supplements in the world.  Caffeine is a trimethylxanthine stimulant that acts on your adenosine receptors, blocking them from making you drowsy.  Caffeine has been shown in many studies to combat fatigue, as well as improve reaction time and increase wakefulness. It’s regarded as one of the best ergogenic aids a person can take.  This formula provides 200mg of all-natural caffeine.

Alpha-glycerylphospocholine(Alpha GPC): Alpha-GPC is regarded as the “Cadillac” of all the choline sources, and for good reason.  It is 40% choline by weight, and due to its very lipophilic glycerylphosphoryl backbone, it can very readily cross the blood-brain barrier.  This, in turn helps increase levels of acetylcholine, the neurotransmitter responsible for increased attention, memory formation, and cognitive enhancement.  In a 6-month study involving 261 participants, alpha-GPC was shown to significantly improve cognitive function.  Another study showed that it can help preserve acetylcholine levels when under stress, thus making you think more clearly. This formula supplies 400mg of alpha GPC per serving, with studies using 300mg as a base.

Huperzine A: Huperzine A is a natural acetylcholinesterase inhibitor, meaning it prevents the breakdown of acetylcholine in the brain.  It is by far the strongest acetylcholinesterase enzyme inhibitor on the market.  There are even studies showing it can be neuroprotective against beta-amyloid pigmentation, a protein that has direct links to Alzheimer’s disease, as well as protection against hydrogen peroxide- induced damage.  This formula contains 300mcg of Huperzine A from its natural source Huperzia serrata.

Noopept: Noopept is a peptide made up of N-phenylacetyl-L-prolylglycine ethyl ester, and a very powerful nootropic.  In the body, it’s converted to the peptide cycloprolylglycine which seems to be the active metabolite.  Noopept has been shown to increase levels of nerve growth factor(NGF) and brain-derived neurotrophic factor, both act on the hippocampus which is the learning center of the brain. Noopept has even been shown to help deliver acetylcholine to the neuron so it can be active. There also has been a sensitizing effect on acetlycholine, which may help with memory formation and cognitive function.  This formula contains 25mg of Noopept per serving.

Bacopa Monnieri leaf (20% Bacosides): Bacopa monnieri is an Ayurvedic herb that has been used for cognitive enhancement and memory improvement for hundreds of years. It’s known as an adaptogen, meaning it’s safe and has a positive effect on stress and the body. Its main mechanism of action is improving neuron communication and enhancing the rate of communication by increasing nerve endings called dendrites. Bacopa monnieri may also act as a mood enhancer, due to its interactions with dopamine and serotonin.  It also seems to work better the longer you take it, like most adaptogens.  This formula includes 240mg of Bacopa monnieri per serving.

Rhodiola Rosea (1% Rosavins 3% Salidrosides): Rhodiola Rosea is another adaptogen which has a very strong anti-fatigue effect.  It is mostly used to reduce stress, both mental and physical.  The main actives are rosavins and salidrosides.  These are responsible for many of the effects of rhodiola. In a study involving 59 subjects, the group receiving 170mg of rhodiola showed a 20% improvement in work-related tasks.  This shows how powerful it can be as a nootropic.  Another study showed the rhodiola group (200mg) showed reduced fatigue and stress, as well as mood improvement.  Rhodiola can also act as a monoamine oxidase inhibitor(MAOi), which can decrease the breakdown of dopamine, serotonin, and adrenaline.  This formula contains 200mg of a standardized Rhodiola Rosea extract.

Lions mane (20% beta d-glucans): Lions mane is another powerful nootropic that has shown to improve memory and cognition, increase NGF, which can cause nerve regeneration, as well as decreased levels of beta-amyloid plaque.  Lions mane also has anti-inflammatory and antioxidant properties.  One human study showed improved memory and scores on cognitive tests.  Lions mane also contains erinacine, which can increase dopamine levels and possibly mood enhancement.  There is also an immune system boosting effect from the beta d-glucans, which can also improve gut health. Over 80% of your body’s serotonin is produced in the gut so it may help with serotonin release.  This product contains 375mg of lions mane extract.

L-theanine: L-theanine is an amino acid that promotes relaxation and may help reduced stress. It was included in this formula based on research showing the combination of L-theanine and caffeine improved cognition and attention in users, as well as reduce fatigue.  L-theanine can also help regulate nitric oxide production and improve blood flow to the brain.  Studies also show that L-theanine can act as an anxiolytic, meaning it can reduce anxiety in users and may improve response time for tasks.  It can also very easily cross the blood-brain barrier, making it highly effective orally.  This formula contains 100mg of pure L-theanine.

Synephrine from Citrus aurantium: Synephrine is one of the main alkaloids found in the fruit Citrus aurantium and is a powerful stimulant for alertness and wakefulness. There have been studies showing synergistic effects between synephrine and caffeine. Synephrine is known as a beta-2 adrenergic agonist which can increase energy and metabolism. There are 3 different isomers of synephrine, but this formula uses the most studied and medicinal form p-synephrine. Synephrine can supply quite a bit of energy and works well with all the other nootropics in the formula.  50mg of active synephrine is found in this formula.

Vinpocetine has a dramatic effect on the blood vessels in the brain enhancing blood flow to the brain cells. This can greatly enhance the delivery of nutrients and oxygen to the brain.  Vinpocetine also reduces the viscosity of red blood cells because it inhibits PDE1 enzyme.  The effect of this is that it allows the flow of blood more easily through blood vessels that are narrow which can help protect the tissues in the brain.

Piperine(Black Pepper Extract): Piperine is an alkaloid found in black pepper that has many important biological properties.  Firstly, piperine can inhibit a process known as glucuronidation, which is the addition of a glucose molecule to a substrate in order to make it more water soluble and easier to eliminate.  For example, piperine combined with curcumin has been shown to increase absorption by 2000%.  Piperine also acts as a strong MAOi, which is why it’s in the formula.  It can drastically increase the longevity of dopamine, serotonin, other catecholamines, as well as in this formula synephrine which boost cognitive effects.  It has also been shown to have cognitive benefits from 2 different studies, mostly due to its effect on serotonin and dopamine. In a 2010 study, it was shown that piperine can enhance the effects of caffeine, possibly due to higher absorption.  This formula contains 10mg of piperine, which is an effective and standard dose.

Overall, this formula contains 10 different ingredients, all working together to make you more alert, wakeful and enhance your cognitive abilities.  This is not the same as taking a bunch of stimulants that work for 3 hours and then you crash hard.  This formula was designed specifically to increase brain activity and cognitive function, as well as reduce stress through various mechanisms of action, all working together to make you perform at your best.  Go out and try Neuro Beast now!

Neuro Beast is sold in a 90-capsule bottle, which is enough for a 30-day supply. 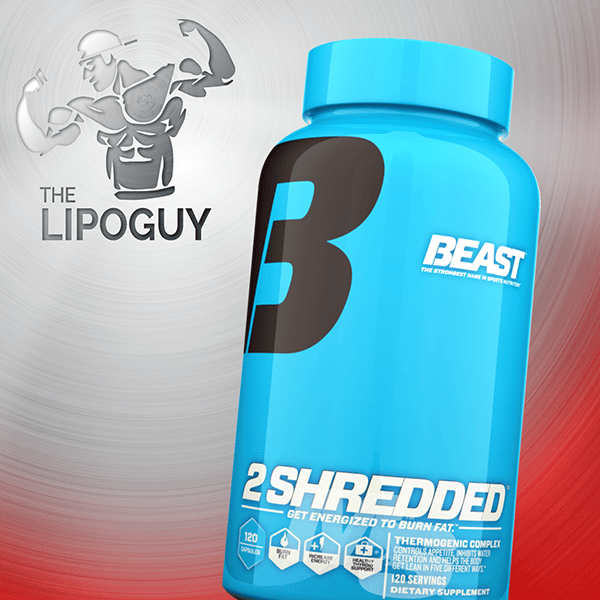 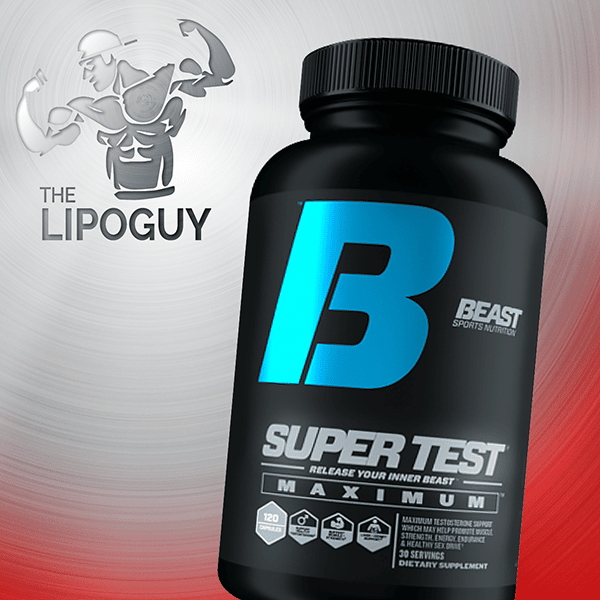